Recent market data highlight a pressing need to deal with Home Affordable Modification Program loopholes and systemic problems that are costing homeowners their homes and preventing servicers from being efficient in their efforts to cope with the foreclosure crisis.

Insiders say large servicers are not set up to perform loan modifications and HAMP is not making it any easier for them.

Currently, according to a new NCLC study, it is more cost effective for residential servicers — including the nation’s largest holders of receivables — to foreclosure on delinquent homeowners rather than to offer them loan modifications.

Modifications still are not happening at significant numbers because Congress, the Securities and Exchange Commission, investors and credit rating agencies “have failed to provide servicers with the necessary incentives to reduce foreclosures and increase loan modifications,” says Diane Thompson, an attorney with NCLC and author of “Why Servicers Foreclose, When They Should Modify and Other Puzzles of Servicer Behavior.”

“The report tears apart the different ways servicers get paid. And it’s pretty clear that servicers are more certain to recover their money and thereby make a profit better, if they foreclose, than if they modify.”

For example, data from one of the country’s largest servicers, Ocwen Financial Corp., West Palm Beach, Fla., and at least another six servicing agreements show that it is more profitable to go into foreclosure for servicers that own affiliates or management companies that get paid for all the foreclosure fees. (Ocwen reported it completed 44.6% of all of the HAMP permanent modifications.) “They are generating income from the defaults.”

In addition, according to Ms. Thomson, this type of business structure creates opportunity for fee padding. “In the report we cite the case of Wells Fargo testifying that they charged the homeowner, and ultimately the investor, $125 for a service that they actually paid out only $50 on. Ocwen’s annual report shows both how much money it collects from its main servicing operation and its asset management company. The difference is substantial.” Similarly, reviews from IndyMac, Chase and a few other banks, she said, “point to the fact that servicers get most of their income from the servicing fee and recover their expenses off the top in a foreclosure.”

The report reveals systemic problems, including lack of clear HAMP guidance and how they should get their money in a modification. Credit rating agencies do not provide much guidance either, Ms. Thomson says, and where given, it does not make sustainable modifications as attractive as foreclosures, “because it slows down” the recovery of their financial advances, which for servicers is one of their major costs other than staffing.

“There is an infrastructure that is set up to process foreclosures, and that is detaxed, but there isn’t an infrastructure that large servicers have set up to process modifications. So there’s a huge initial outlay for staffing, training, getting all the computer programs and the platforms going. Plus a lot of institutions have inertia to get there and move it along.”

These findings indicate that all loan modifications should have the same requirements applied on the FHA modification program.

That inquiry should be done first since it helps keep costs down for all parties involved.

“We looked at publicly available documents and previous studies from different sources to see how HAMP works. We don’t have hard numbers from most servicers,” Ms. Thomson said. Asked whether she tried to get data from other servicers she admitted of not even trying. “That’s because the goal was to understand what the incentives were from a macro perspective.”

The report is based on data from loans in foreclosure from 1995-2009. Recommendations include requirements to fund quality mediation programs, provide for principal reductions on existing loans through HAMP and bankruptcy reform, increase automated and standardized loan modifications for borrowers in default, ease loan modification accounting rules to facilitate standardized review, and enhance servicer recovery of the expenses incurred in performing a modification.

This site uses Akismet to reduce spam. Learn how your comment data is processed. 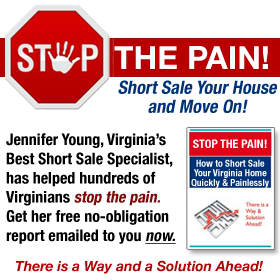 Learn more about the Bank of America Co-Op program and those of other lenders looking to help struggling homeowners.

Search Short Sales in your Area

Hear from our clients…

Jennifer Young was a great agent, especially because of the amazing team working behind the scenes. Her and her staff knew so much about short sales.

Jennifer Young sold our home for us in Fairfax, VA and did an incredible job. It was priced right and went under contract in less than 10 days.

We worked with Jennifer Young and her team when short selling our property. They were on-the-ball and completely on top of my case at all times. .